There are 1 available flats, houses, land and commercial property in Ideato South, Imo, Nigeria. The property have been listed by estate agents who can be contacted using the contact information provided for each property listing. The list can be filtered by price, furnishing and recency.

Invest In A Plot Of Land. 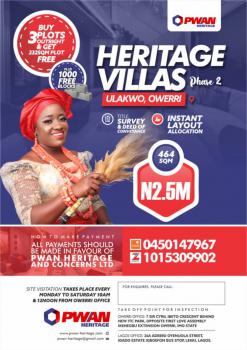 5 reasons why you should make this financial commitments into Heritage Villa Estate 1) Hospitality and Culture: Owerri boost of some of the best foods, leisure lounges, and Hotels in south eastern Nigeria. Her women have a delicate way of making ofe owerri like no other. Her people are friendly and accommodating. Her business environment is one of collaboration and not competition. 2) With $14.212 million GDP and per capita of $3.527, Imo state is the 5th riches state in Nigeria with natural resources such as zinc, lead, limestone, fine sand, white clay, natural gas, crude oil and over 160 oil wells and a thriving business environment. Imo state boost of high purchasing power with most of her cashflow revolving around the city. 3) Imo state is celebrated for her high level of educational activities boosting of over 5 high institutions within her city. Resulting in consistent demand for accommodation for her ever growing population of students as well as middle class earners. 4) Do you know that you can easily access the south south states as well as South Eastern states from Owerri either by road or air . Making Imo state a very centralised location prime for both tourist and business men alike. 5) Heritage: A typical Igbo man will always have a home in his hometown and leave some for his kids hence the reason you should invest on *HERITAGE VILLAS PHASE 2, ULAKWO OWERRI NORTH LGA, IMO STATE.* *PRICE: 0 - 6 months* *2.5million naira* *7 - 12 months* *N3,000,000* *PROMO: Buy 3 plots outright (or pay within 3 months) and get 232sqm plot free* *Also we are enabling the first 30 subscribers who paid outrightly with 1000 blocks free of charge for fencing of their plots.* Hurry now while offer lasts . For more info Call or whatsap :07031688124

The Ideato South depends mainly on agriculture and commerce and the main occupation of the people is farming and trading. Orashi River takes off from Ezeama community in Dikenafai. Described as a lifeline to Ideato South communities, Orashi stream serves as an all purpose river for drinking, washing and many other purposes to communities such as Umulewe, Umuezealla-Ogboko, Umuchima and Ntueke. Religion occupies a central place in the heart of the people. The people are mostly Christians of different denominations.

How many flats, houses, land and commercial property in Ideato South, Imo are available?

There are 1 available flats, houses, land and commercial property in Ideato South, Imo.